Under her wing: thirty years observing the secret lives of superb fairy wrens

“Cumquat needs to leave very soon,” Helen Osmond says in a concerned, parental kind of way, as she pulls a pair of binoculars back from her face.

Cumquat is a fluffy, round, one-year-old female superb fairy-wren. She’s about the size of her fruity namesake and lives in the Australian National Botanic Gardens in Canberra.

Helen, a research officer with the Research School of Biology at ANU, has known Cumquat since the wren was a tiny featherless chick. In fact, it’s quite likely it was Helen who put the coloured ID band on Cumquat’s leg.

She also knows it’s now time for Cumquat to move away from this patch of garden where the bird has been living with her brother, and find new territory for breeding – hence the concern.

Cumquat prances to a nearby rock obliviously and has a quick splash in the pond.

Image
This is Cumquat drying off from her bath. Photo: Olivia Congdon/ANU

For the past thirty years, Helen has been undertaking fieldwork for a project following the fairy-wrens of the botanic gardens, giving her a unique view of their complex lives.

She confesses that she has more conversations with the birds than with people.

“I’ve always wanted to understand animals and this project has enabled me to enter their world,” Helen says.

You could call her the Jane Goodall of superb fairy-wrens.

Thanks to the long-term nature of the study, run since 1986, researchers from the ANU Cockburn group have produced valuable insights about the unusual behaviours of the wrens.

Helen joined the team after her ANU biology degree, and was instantly drawn to these teensy, charming, sometimes feisty birds and their intricate social lives.

Helen’s job is to observe and collect data all year-round. She spends her working days banding wrens, collecting blood samples for DNA analysis and tracking population changes. In the spring and summer, she becomes a nest hunter.

The wrens’ business dictates her schedule: there are no extra holidays in the nesting season. The wrens don’t stop for Christmas.

“I'm hanging out with birds all day in nature. It's not just the fairy wrens that keep me interested. It's figuring out everything else that's going on around me. Knowing how things happen there is really satisfying for me,” she says.

Helen can walk past any random section of the gardens and tell you where the thornbills frequent, which bird species use that spindly grass for nesting, and that the high-pitched p’chock sound in the distance is one of the first noisy friarbirds back this season.

And of course, she can tell you exactly what each fairy-wren has been up to, where they live, their ancestry and who they’re friends with (or not friends with).

“One of the most surprising and rewarding things about this job has been learning to understand their vocalisations,” Helen says.

“When I first started, I thought they only had a handful of call types.”

But then after repeated exposure – a privilege of spending so much time in the field – she started to match specific sounds with particular social situations, behaviour or life stages.

“But I think it must be close to 20 different calls for different purposes. It has been a slow process of de-coding. It takes time to realise that the calls that are commonly heard are not a 'typical' wren call, made by every bird at any time.”

It’s not just calls which wrens use to communicate. Helen sees the wrens viciously attack intruders to their territory to ward them off; she witnesses bright blue males bringing yellow petals to potential mates, and the females either accepting or rejecting the offered petal.

Some wrens are calm, some are bold, a few are doddery. Helen says a wren can live to the ripe old age of thirteen years. Although, in reality they’re lucky if they get a third of that lifespan.

Watching generations of fairy-wrens’ lives play out in front of you, getting to know them and their distinct personalities is a true gift. It’s a gift to witness their mortality too, she says.

“I've seen one wren taken by a butcher bird and another being taken by sparrowhawk. I’m okay with it,” she says. "It's actually pretty special to have the answer to how their life ended: this is what happened to this bird.”

The natural processes are one thing, but human interference is harder to accept. This is why, especially at nesting season, she’s very careful about her movements.

“Wrens really rely on camouflage and secrecy to do well, so you don't want to be giving away their secrets,” says Helen.

In the thirty years that Helen has been in the gardens, she’s been privy to countless secrets that have become scientific data.

In turn, this data has fed into research papers and PhD theses on topics such as the wrens’ unique breeding strategies and population dynamics, the impact of disease, potential genetic causes of population declines, and the dramatic effects of climate change on wild populations.

All of this science is the result of everyday observations made one at a time, penned by Helen’s hand, just like the notes on Cumquat and her friends.

“Cumquat is going to be famous after this,” Helen says. She is always thinking about the birds.

Immerse yourself in the world of biology with a undergraduate or postgraduate science degree from ANU. 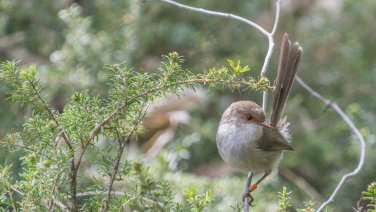 Warmer temperatures linked to climate change are having a big impact on the breeding habits of one of Australia’s most recognisable bird species. 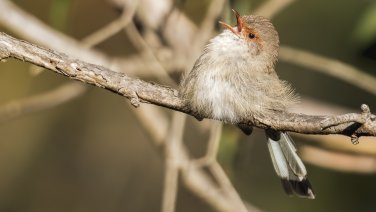 Five years ago, an ANU biologist proved that most female songbirds sing, but it’s a finding that many people are struggling to accept. 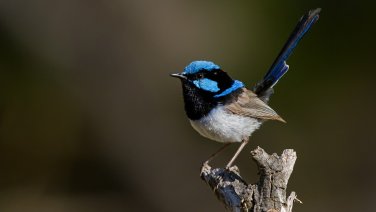 A new study has shown that the female Superb Fairy-Wren has the ability to change the size of the eggs it lays in a biological feat which could buffer against the effects of climate change.