Taking a seat at the topological table

In the Jane Austen-themed board game Dr Katharine Turner has designed, the aim is to fill your dinner party table with a collection of guests who combine the best of wit, wealth, heart and beauty.

You can seat Mr Darcy (valued highly for wealth and heart, of course) at the head of your table, and hope he’ll offset the presence of Mr Collins (with zero wit and beauty). Guests, and societal assets, are added, removed and stolen from other players in a cut-throat quest to rise to the top of the social ladder.

The game is called Polite Society and, following a successful $60,000 Kickstarter fundraising campaign, will soon be shipped to customers.

Dr Turner, a topologist from the ANU Mathematical Sciences Institute, developed the game with her sister Eleanor, who is an English literature student. The combined interdisciplinary expertise of the Turner sisters would no doubt make them rewarding guests at the figurative dinner party table.

Seated first is a neuroscientist studying the connection between neurons in the cortex of a rat. Next to them there’s an anthropologist who is researching the shape of primates’ heel bones. Then there’s a medical researcher studying how lungs deteriorate with age and disease, who’s chatting to an applied mathematician who is analysing how temperature affects the distribution of particles in liquid. A late arrival to the table is a cyber-security expert trying to work out how to detect malicious electronic messages.

And they’re all jostling for a seat next to Dr Turner.

The dinner party might be imaginary, but these researchers are not, and have all in fact collaborated with her, or are currently doing so.

Because it is a truth universally acknowledged that a scientist in possession of good data, must be in want of a topologist.

“Topology is a like a high-dimensional version of graph theory,” Dr Turner explains. “Graph theory analyses connections in a network, whereas topology also looks at the spaces between those connections.

“It is a mathematical tool which can be applied to many fields in science and engineering.

“I always have in the back of my mind, ‘I have this hammer. Where are my nails?’ I’m looking for how it can be applied. That’s the great advantage of studying a tool rather than an object, and it means I get to be the student of other disciplines. I’m always willing to be the one saying I don’t understand.

“It has also made me more innovative. For a lot of what I do, there’s nothing ‘out of the box’ which is quite relevant. None of the previous tools might fit your data structure so you have to modify it quite intensively or make something completely new.”

“Sadly there was no topology used in designing the game,” Dr Turner laughs.

“But maybe I will design a board game about that! You’d just need a game that was about directions….”

And so the foundations are laid for her next innovation.

As Mr Darcy himself says, “a lady’s imagination is very rapid.”

Dr Turner lectures in mathematics at ANU. Find out how a maths degree can get you a seat at the top table. 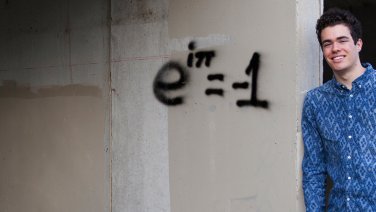 The Bachelor of Mathematical Sciences provides the tools to study these patterns and structures and along the way, you learn transferable skills in critical thinking, analysis, investigation and evidenced-based decision-making.