Getting to the core of climate history 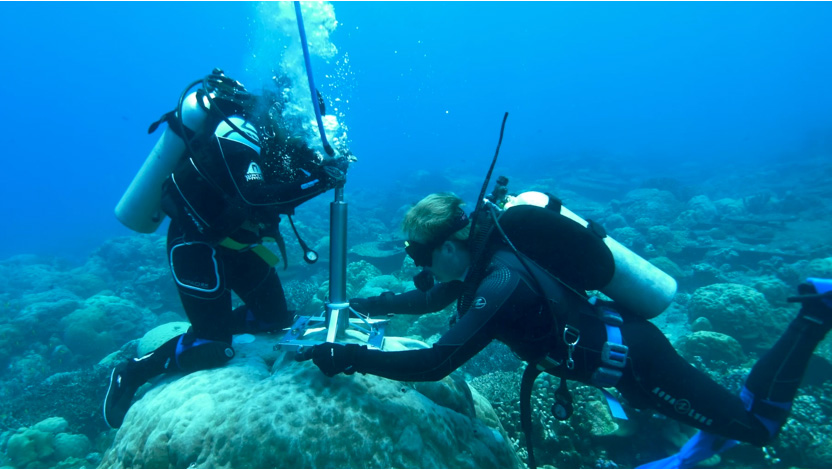 Jess Hargreaves wanted to be a mathematician, so how did she end up a palaeoclimatologist?

Because of a clam.

Jess, a PhD researcher at the ANU Research School of Earth Sciences, says it was during her Bachelor of Science (Advanced) degree when this new career path presented itself to her.

“In an undergraduate research project, we used clams from an island in the Pacific to look at El Niño cycles,” she remembers.

“And I just thought it was mind-boggling that you could pick up this tiny little clam and see that there was an El Niño cycle happening while it was alive.

“I thought it was crazy that something so tiny could tell you so much about climate.”

This description could now apply to Jess’ own mind-boggling PhD research: she digs out coral skeletons to understand how rainfall patterns in the South-East Indian Ocean region have changed over time.

“From the coral cores, we can work out past rainfall and past sea surface temperature records over the last 200 to 400 years,” says Jess. “That tells me how rainfall has changed in that region and what that means for Australian rainfall in the future.”

Corals are a treasure trove of climate data that can stretch back hundreds of years. A coral will typically grow one to two centimetres each year it lives on a reef, producing a band of growth that’s visible in its skeleton.

To study those carefully preserved stages of growth, researchers drill out a long, cylindrical core from the centre of the coral. It’s similar to examining tree rings to learn about a tree’s age and the conditions affecting its growth over time.

PhD researcher Jess Hargreaves next to a coral core.

Once a core has been extracted, it’s taken back for further analysis at the ANU lab, where it gets sliced into sections, scanned with x-rays and UV imaging, and eventually milled into a powder, generating thousands of samples in the process.

Those samples reveal the balance of elements in the coral skeleton for any given time, which, in turn, tells researchers about the climate conditions that were present.

Two metres of coral can provide 200 years of data to a staggering level of precision.

“In a centimetre or two of coral growth, you can pick out fortnightly measurements,” says Jess.

“I can’t say ‘It rained two millimetres on this day, 200 years ago’ – but I can tell you that at that time, the rainfall was possibly higher than it is now, or whether the sea surface temperature had changed over that time.”

Just like that one clam changed the direction of Jess’ life, she hopes her research can now change ours.

“The fact that we haven’t done anything yet in terms of climate on a large scale is so depressing,” she says. But it’s understanding how her research fits into the bigger picture that keeps her going.

“Without knowing what happened prior to human-induced climate changes,” she says, “we can’t say how much tropical rainfall change is natural and how much is driven by human activity.”

And once we do know, then we have no excuse not to do anything.

The ANU Research School of Earth Sciences is Australia’s leading academic research institution for Earth and marine sciences. If you’re interested in clams, or changing the world, find out more about our research programs.

The Bachelor of Science (Advanced) (Honours) provides the same breadth of opportunities as the Bachelor of Science, with the addition of an honours year designed to extend your understanding and introduce you to concepts that are more advanced than standard course activities.