Pacific Island bats are utterly fascinating, yet under threat and overlooked. Meet 4 species

Am I not pretty enough? This article is part of The Conversation’s new series introducing you to unloved animals that need our help.

A whopping 191 different bat species live in the Pacific Islands across Micronesia, Melanesia, and Polynesia — but these are, collectively, the most imperilled in the world. In fact, five of the nine bat species that have gone extinct in the last 160 years have come from this region.

For too long, the conservation of Pacific Island bats has been largely overlooked in science. Of the 191 existing species, 25% are threatened with extinction, and we lack information to assess the status of a further 15%.

Just as these bats are rare and far-flung across the Pacific islands, so is the expertise and research needed to conserve them along with the vital ecosystem services they provide, such as pollination, seed dispersal, and insect control.

The first-ever Pacific Islands Bat Forum, held earlier this month, sought to change this, bringing together a new network of researchers, conservationists, and community members — 380 people from 40 countries and territories — dedicated to their survival.

So, why should we care about these bats anyway?

Conserving Pacific Island bats is paramount for preserving the region’s diverse human cultures and for safeguarding the healthy functioning of island ecosystems.

In many Pacific Island nations, bats have great cultural significance as totems, food, and traditional currency.

Bats are the largest land animals on many of the Pacific islands, and are vital “keystone species”, maintaining the structure of ecological communities.

Yet, Pacific Island bats are increasingly under threat, including from intensifying land use (farming, housing, roads) invasive species (rats, cats, snakes, ants), and human harvesting. They’re also vulnerable to climate change, which heightens sea levels and increases the intensity of cyclones and heatwaves. 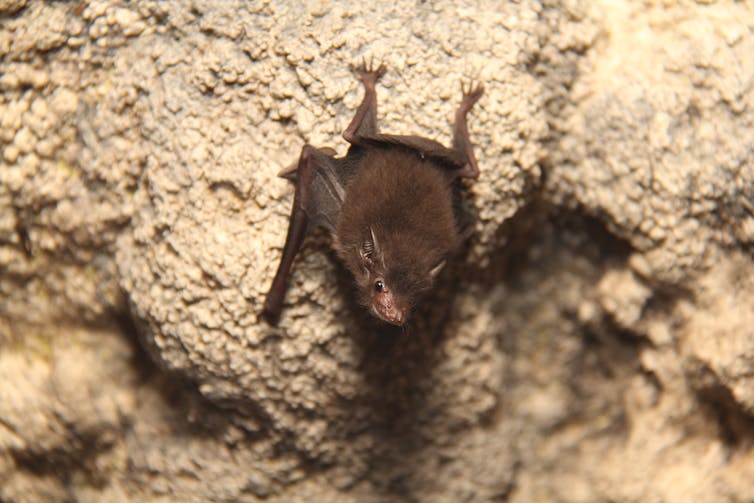 The Pacific sheath-tailed bat (Emballonura semicaudata) weighs just five-grams and has a weak, fluttering flight. Yet somehow, it has colonised some of the smaller and more isolated islands across the Pacific, from Samoa to Palau. That’s across 6,000 kilometres of ocean!

Over the past decade, this insect-eating, cave-roosting bat has disappeared from around 50% of islands where it has been recorded. The reasons for this are unclear. Disturbance of cave roosts, introduced species such as lantana and goats, and increasing use of pesticides, may all have played a part.

Unfortunately, the Pacific sheath-tailed bat is now presumed extinct in many former parts of its range, including American Samoa, Tonga, and several islands of the Northern Mariana Islands. This leaves Palau, the Federated States of Micronesia, and Fiji as remaining strongholds for the species, though data is limited. 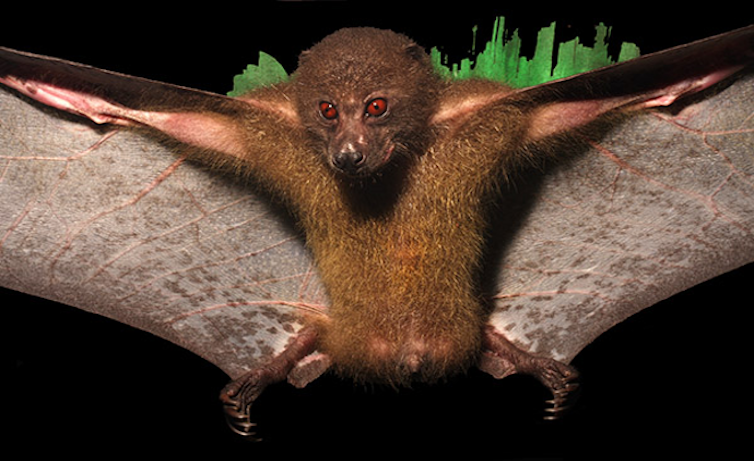 There are six species of monkey-faced bat — all are threatened, and all are limited to islands across the Solomon Islands, Bougainville, and Fiji.

The montane monkey-faced bat (Pteralopex pulchra) is one species, and weighs around 280 grams, eats fruit and nectar, and has incredibly robust teeth. But perhaps most startling is its ruby-red eyes and wing membranes that are marbled with white and black.

The montane monkey-faced bat has been recorded only once by scientists on a single mountain (Mt Makarakomburu) above the altitude of 1,250 metres, on Guadalcanal Island. This tiny range makes it vulnerable to rare, extreme events such as cyclones, which could wipe out a whole population in one swoop. And being limited to mountain-top cloud forests could place it at greater risk from climate change.

It’s an extreme example of both the endemism (species living in a small, defined area) and inadequacies of scientific knowledge that challenge Pacific island bat conservation. 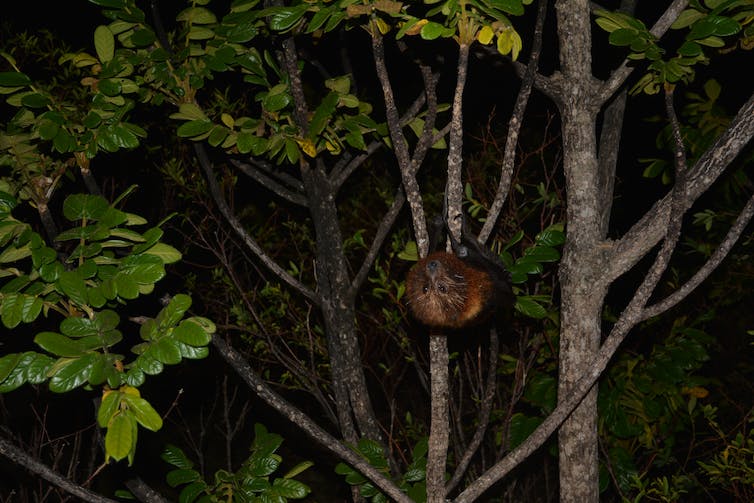 Like many fruit bats across the Pacific, New Caledonia’s endemic ornate flying-fox (Pteropus ornatus) is an emblematic species. Flying-foxes are hunted for bush meat, used as part of cultural practices by the Kanaks (Melanesian first settlers), are totems for some clans, and feature as a side dish during the “New Yam celebration” each year. Their bones and hair are also used to make traditional money.

Because they’re so highly prized, flying-foxes can be subject to illegal trafficking. Despite the Northern and Southern Provinces of New Caledonia having regulated hunting, flying-fox populations continue to decline. Recent studies predict 80% of the population will be gone in the next 30 years if hunting continues at current levels.

On a positive note, earlier this year the Northern Province launched a conservation management program to protect flying-fox populations while incorporating cultural values and practices. 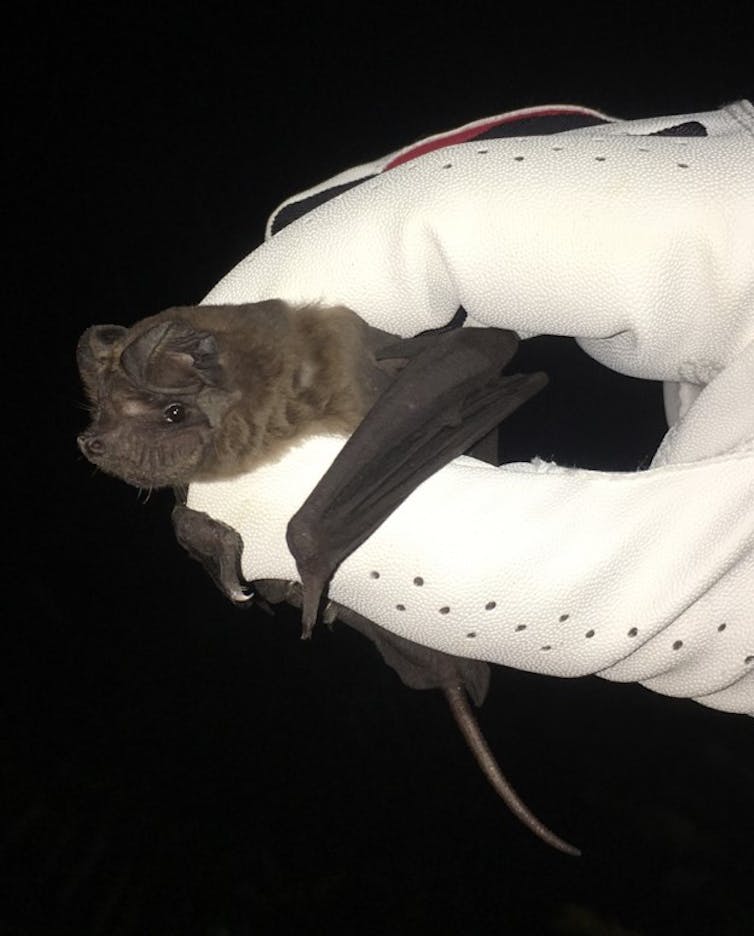 In many ways, the Fijian free-tailed bat (Chaerephon bregullae) has become the face of proactive bat conservation in the Pacific Islands. This insect-eating bat requires caves to roost during the day and is threatened when these caves are disturbed by humans as it interrupts their daytime roosting. The loss of foraging habitat is another major threat.

The only known colony of reproducing females lives in Nakanacagi Cave in Fiji, with around 7,000 bats. In 2014, an international consortium with Fijian conservationists and community members came together to protect Nakanacagi Cave. As a result, it became recognised as a protected area in 2018.

But this species shares many characteristics with three of the nine bat species that have gone extinct globally. This includes being a habitat specialist, its unknown cause of decline, and its potential exposure to chemicals through insect foraging. It’s important we continue to pay close attention to its well-being.

Where do we go from here?

In many Pacific Islands, bats aren’t protected by national laws. Instead, in many countries, most land is under customary ownership, which means it’s owned by Indigenous peoples. This includes land in Papua New Guinea, Solomon Islands, and Vanuatu. Consequently, community landowners have the power to enact their own conservation actions.

As the Baru Conservation Alliance — a locally-led, not-for-profit group from Malaita, Solomon Islands — put it in their talk at the forum:

conservation is not a new thing for Kwaio.

Now the forum has ended, the diverse network of people passionate about bat conservation is primed to work together to strengthen the conservation of these unique and treasured bats of the Pacific.