My science journey and where I am now 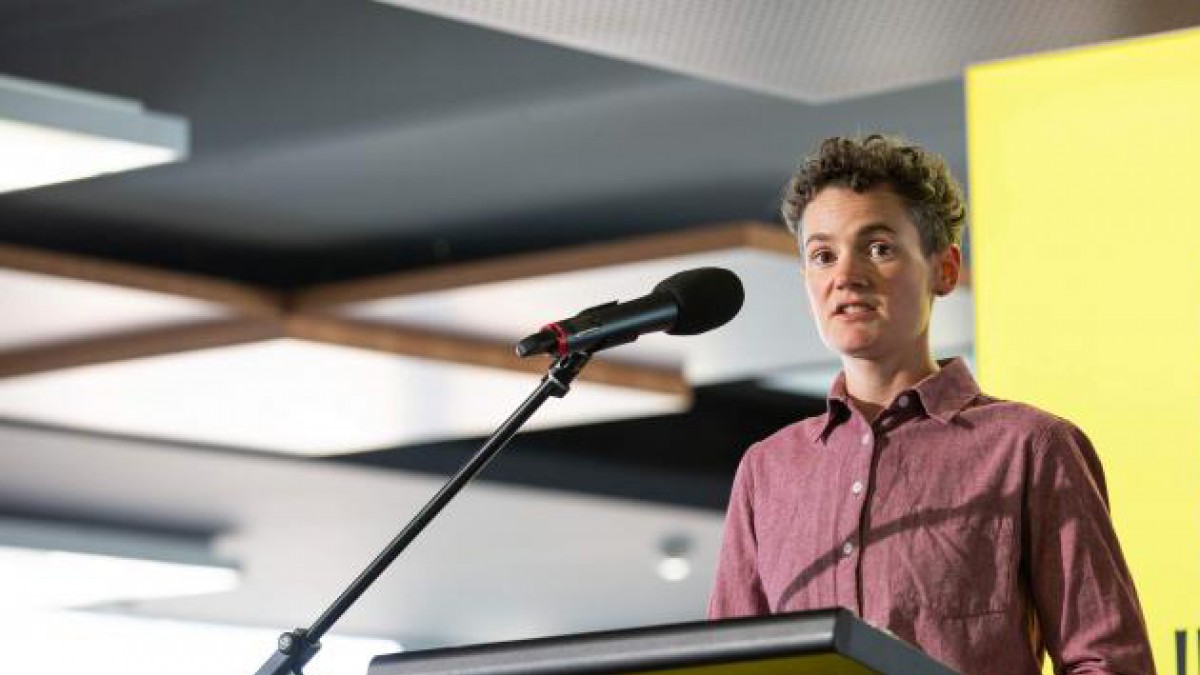 Sophie Lewis, ACT Scientist of the Year and ANU almuni, gives a speech to tomorrow's scientists. It was delivered at Interactive Science at the Shine Dome on the 10th August 2019.

I’ve wanted to be a scientist since I was 4 years old.

My story began many years ago when my parents took me stargazing as a young child in the hope of glimpsing Halley’s Comet. We trudged for some time through the open grassy fields and then we waited, and we waited. It was a pale, grey night. In our part of the world, thick banks of cloud masked the comet’s voyage across our skies.

There was nothing to be seen that night, but still I was thrilled and became hooked on science.

Over the following years, my family spent a lot of time in the foothills of the Australian Alps. On trips to the country I collected furiously — old bones or teeth, snake skins, tadpoles, feathers, leaves, seed pods, river stones, freshwater yabbies, anything I could get my hands on.

My uncle gave me a microscope and slidemaking kit, and then a few years later, my grandmother gifted me a small telescope. At any moment, a rock might reveal a fossil and a starry night might show me particularly breath-taking meteorite.

At high school I studied as much science and maths as I could. A pocket full of seedpods and beetle casings was replaced by notebook with sketches of Bunsen burners, atomic models and calculus equations.

An honours degree, PhD and postdoc followed. Then another postdoc and a grant to start my own research program.

Looking back on these decades, my journey to scientist seems to make sense. It’s textbook really! I wanted to be a scientist and pursued my goal and here I am at the Shine Dome.

But let me talk you through some of the speed bumps and bunny hops. Or as my wife would call them – Sophie-isms.

In later high school I attended a science camp where a chance meeting shelved my science dreams. Engineering, I decided, that would be for me. It would be just perfect. It’s just like science, except you get a job at the end..….Except its not just science, it turns out engineering is engineering.

I stumbled my way through 18 months – there was the week after week of picking the wrong pencil during drafting classes and getting atrocious marks in return. There was the accident with the hot glue gun building a prototype. And then there was the particularly ill-designed gantry.

Eventually I realised it wasn’t for me and transferred over to science and we are all safer for it.

A few years later, I had my heart set on a particular honours project. My plans were delayed when I suffered a serious bout of flu that left me in bed for over 5 weeks. One morning I woke with a sudden change of heart about my project. A flurry of emails sent from my sickbed, and I took a sharp turn with another supervisor.

After my Honours year, I accepted an offer into a PhD program at ANU. I knew nothing about ANU, I didn’t have a project, or a supervisor lined up, and I knew next to nothing about Canberra.

Unsurprisingly, my PhD research changed directions several times, and my supervisor too in rather difficult circumstances. A misplaced but valuable specimen and a sample sneezed off the high precision scales taught me that lab work wasn’t for me.

But I persisted, found my way through and discovered what I loved and what I didn’t.

At that point, I decided that academia wasn’t for me either. I was weighing up whether I could endure further study or not. I put a few job applications in to hedge my bets.

Professor David Karoly – a treasure of Australian science – saw something special in me. He offered me a research position at Melbourne Uni, and I couldn’t say no.

Professor Karoly offered me the chance to tackle problems around climate change that had been on my mind for over a decade. How are extreme weather and climate events changing and what’s in store for our future?

Once again, all the furniture was packed up and travelled the Hume Highway. It was an exciting time intellectually.

But two years later, when it was clear my partner’s PhD thesis needed to be tackled back in Canberra, the couch got another trip back up the Hume, returning to roost in Lyneham.

We took a gamble that Canberra was the definitive place for us, and our work would work out. It did.

Well mostly. There were times when I felt that I’d made poor decisions about my direction. At one point, I met a careers counsellor, learned to write selection criteria, I bought a snazzy suit and applied for public service roles. I was ready to try something new, something different where I could continue to work on climate change and sustainability.

But just as I was signalling for the off ramp of my scientific career, I got news that I was successful in a highly competitive grant application and would be funded to research Australia’s climate extremes for 3 years. It was an opportunity too rare to turn down. And so, I went on with my research.

And there have been many more times since that I’ve taken off from the traffic lights in the wrong gear, hit the curb or missed a turn off.

Even a textbook career in science is filled with wrong turns and speed bumps, and in my case, I’ll admit the career equivalent of lousy driving.

Taking some time to stop and look back on what worked and what didn’t, it turns out, in my experience at least, that a career in science involves a lot of the same scientific thinking needed to do the research itself.

Let me talk you through what I mean by this and what worked for me.

Firstly, I want to discuss trial and error.

It took me some time to find out what I loved and what I didn’t, what I was good at and what I clearly wasn’t. It took some testing to work out my values and my ambitions.

Just like a scientific hypothesis requires testing, so did my career.

My advice is we can’t be frightened to make mistakes. Every time I’ve had a failure, or made a mistake, I’ve found myself grateful a few years later. And in many cases, the more catastrophic the failure, the greater the gratitude. And sometimes I had to wait years until I was grateful, but it happened.

Most times in our careers, a u-turn can be made, a decision unmade, a trajectory reversed, if we are simply brave enough to try.

Luck is critical in science – paying attention to the right data at the right time, selecting the right sample during field work, or beating another group to publish a snazzy result.

Luck has defined my career. I am lucky to receive this award, knowing the immense quality of scientific research undertaken here in Canberra. I was lucky to get grants, and to get jobs, including that job with Professor Karoly.

More than my career luck, I’ve had a lot of luck in life. Parents and educators who loved me and encouraged my passions. And then luckiest of all, I was lucky to be invited by a friend to a random house party, that turned out to be a birthday party for my future wife. She has supported me through tough times, boring times and good times.

Thirdly, I want to discuss principles.

Just like scientists follow key scientific principles about reproducibility and testability of our data, principals are important for our careers.

I found that I must abide by my principles in the work I do. I always try to act with integrity in the science I do and the way I relate to others.

There are many great scientific minds, and hundreds here in Canberra alone. But it can be hard sometimes to be a good scientist and a good person.

Science is not always kind, welcoming or accessible for everyone. We must strive to do better to provide pathways to all for rewarding and challenging scientific careers.

My guiding principles include kindness and generosity in our work practices. I don’t always get it right, but I try to build others up and I try to give my time to everyone – the public, students and other researchers.

Lastly I want to emphasise passion.

Just like any aspect of our lives, without passion in for our work, we can’t persist, and we won’t be there for the luck.

So that leads me to now. Where am I now? Nearly 2 years ago we were lucky enough to become parents to a loving, feisty, angry, happy, sassy kid. She has focused my work and passion intently on issues of the environment and sustainability.

In the 2 years since my daughter was born, literally hundreds of temperature records have been broken in Australia.

But that 1 degree of global warming has a very large impact on weather and climate extremes in particular locations. And it’s these extremes that are the part of the climate system that we – our health, infrastructure, industries and ecosystems – are most vulnerable to.

Global warming doesn’t mean more BBQs and beers on warm summer evenings and trips to the beach. This excess heat has a very nasty sting.

Before my daughter was born, I was working on a paper with a group of fairly young scientists and a co-author was also expecting her first daughter. She made a note in the margins of the draft, saying “Oh f***”.

What was scientifically interesting was personally shocking. This is our children’s future. What we are obfuscating about now is their lives.

By necessity, my daughter gives me great optimism about our future and a way to see through this grief. We must do better for her. At the same time, our children are demanding we do so, empowering themselves to take on their extreme climate futures.

When my partner and I decided Canberra would be our home, we found also found a home leader in climate action. Canberra has ambitious targets to reduce our greenhouse gas emissions and improve our natural environment for all.

It is a great privilege to have received this award from the ACT. I will use this award to build on our reputation as a climate leader. By working with our passionate, engaged and capable school children, I plan to spend the next year helping our school kids establish a youth climate network to develop and share their skills.

So thank you again for this recognition and enjoy the week of science!