Listen to the Albert’s lyrebird: the best performer you’ve never heard of

Am I not pretty enough? This article is part of The Conversation’s series introducing you to Australia’s unloved animals that need our help.

Mention the superb lyrebird, and you’ll probably hear comments on their uncanny mimicry of human sounds, their presence on the 10 cent coin, and their stunning tail. Far less known – but equally, if not more, impressive – is the Albert’s lyrebird.

Like the superb lyrebird, the Albert’s lyrebird performs spectacular dance displays and, as our latest research shows, produces astounding mimicry of sounds from its environment. The Albert’s lyrebird is part of an ancient lineage of song birds, and even attracted the attention of Charles Darwin himself.

While the superb lyrebird is notoriously shy, the Albert’s lyrebird is more elusive still and is only found in a small region of subtropical rainforest hidden away in the mountainous areas of Bundjalung Country, on the border between New South Wales and Queensland.

Sadly, historical land clearing and recent bushfires have placed this species under threat, and a lack of information may be impeding its conservation. So let us introduce you to this shy performer and convince you that the Albert’s lyrebird is worthy of as much attention as its limelight-stealing sister species. 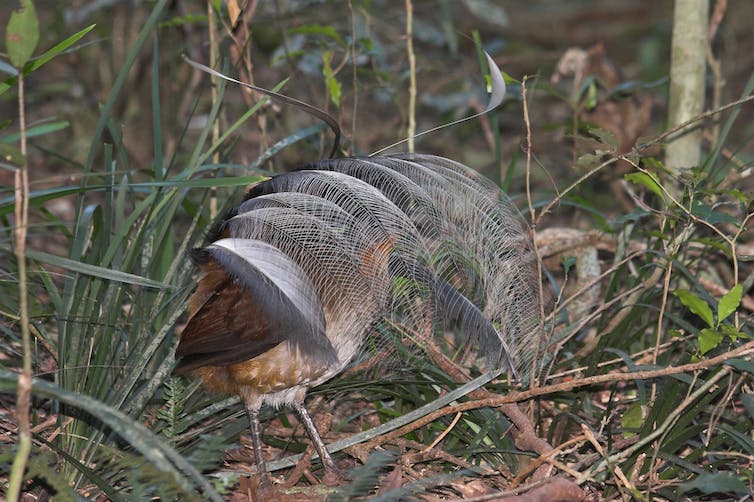 The Albert’s lyrebird (Menura alberti) is a large, ground-dwelling bird that forages by scratching up the soft, leaf-littered forest floor.

Both sexes have dark auburn-red feathers, and the male sports a showy tail made of silvery thread-like feathers that create a waterfall effect over his head during his courtship display. The display also reveals a bright, flame-like patch of orange feathers underneath his tail.

Impressively, they can accurately mimic up to 11 different species, including satin bowerbirds, Australian king-parrots, crimson rosellas and kookaburras, among others.

They also mimic multiple vocalisations from each species, as well as non-vocal sounds such as wingbeats. In fact, one lyrebird can mimic up to 37 different sounds!

A male Albert’s lyrebird mimicking while on his display platform.

In our latest research, we show each male arranges his mimicry into a particular order that’s repeated again and again throughout a performance. What’s more, all males within a location perform their mimicry in a similar order, suggesting this sequence is learnt from neighbouring males.

For example, lyrebirds at Binna Burra, in Lamington National Park, often mimic a kookaburra, followed by an eastern yellow robin, wingbeats, and the “tsit” of a green catbird. You can hear this shared sequence in the recordings below.

We’ve also discovered that males order their mimicry to place contrasting calls together within the sequence. This likely increases “drama”, and highlights the virtuosity of the male through the great diversity of sounds he can produce.

Lyrebirds not only mimic, but also sing their own songs, including their prominent whistle song – a striking melody we could hum or whistle along to, and during the dawn chorus the whistle songs of every lyrebird echo around the escarpments of their range.

These songs also vary from region to region, so each population has its unique set of whistle songs shared among the local males, which you can hear in the recordings below.

It’s not just the males that sing – female lyrebirds are shamefully underrated. Like female superb lyrebirds, female Albert’s lyrebirds sing both their own song and mimic the sounds of other birds.

They seem to often mimic alarm calls of eastern whipbirds, as well as grey goshawks, a fierce predator of lyrebirds.

While the Albert’s lyrebird may be most noticeable for its extravagant plumes and vocal virtuosity, they also likely play an important role in the local ecosystem.

Superb lyrebirds are “ecosystem engineers”, who turn over soil when foraging with their powerful claws, which can reduce bushfire fuel. Albert’s lyrebirds also rake the forest floor while foraging and are likely to have similar impacts. 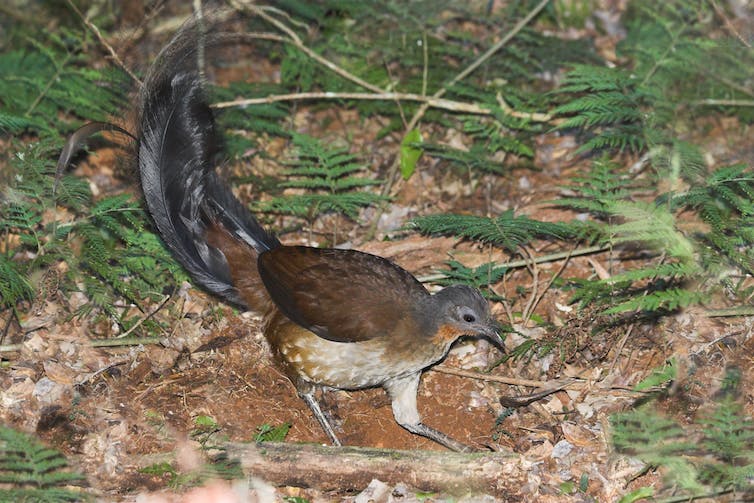 A male Albert’s lyrebird using its powerful claws to forage in the leaf litter. Alex Maisey

Since European colonisation, Albert’s lyrebirds have endured a history of land clearing for agriculture, and were even once shot to put in pies!

As a result, they are listed nationally as “near threatened”, though this listing worsens to “vulnerable” in NSW, where the smallest population has an estimated 10 individuals.

Now, more than ever, it’s important to fully understand the behaviour and ecology of this species to ensure their survival.

What can we do?

The Albert’s lyrebird has escaped much public attention and has likely seen severe habitat loss after the fires. However, there is good news.

Albert’s lyrebirds are not only important as an individual species, but also provide an entire soundscape through their diverse mimetic repertoires that they can perform for over an hour at a time.

They provide a soundtrack to our dwindling ancient rainforests, and are an important part of Australia’s natural and cultural history. Let’s ensure the next generation has the opportunity to meet this shy sister of the superb lyrebird.