The Holy Grail of palaeontology 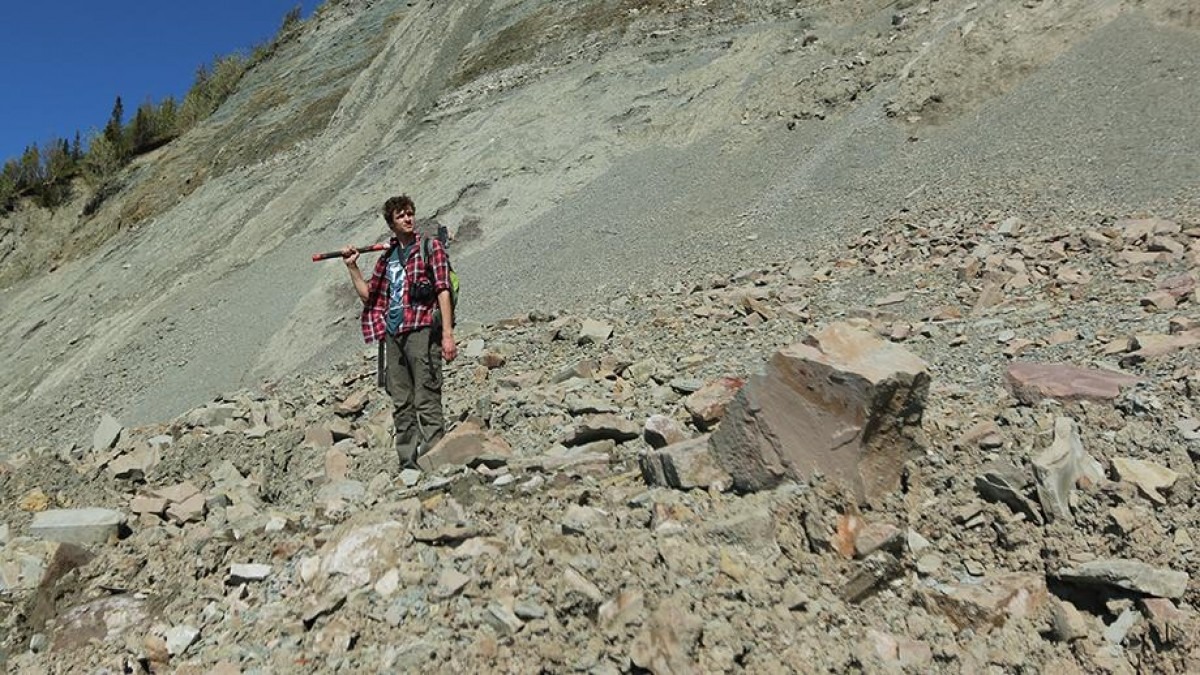 PhD scholar Ilya Bobrovskiy has already revealed the earliest known animal, but you can expect some more big discoveries from this young scientist. Will Wright reports.

Ilya Bobrovskiy had a crazy idea for his PhD.

He told Associate Professor Jochen Brocks, a geobiologist at the ANU Research School of Earth Sciences, that he wanted to experiment with a radical new form of fossil analysis to reveal the origin of Ediacara biota, which are the oldest complex organisms preserved in the rock record.

Since fossils of Ediacara biota were first discovered at Ediacara Hills in South Australia in 1942, debate has raged about whether they were our earliest animal ancestors, failed experiments of evolution, giant unicellular organisms, lichen or bacterial colonies.

Bobrovskiy wanted to extract and analyse organic matter from fossils of these mysterious organisms.

Brocks told Bobrovskiy the chances of finding any organic molecules in the fossils were practically zero. Palaeontologists usually study the structure and morphology of fossils to find out the nature of the ancient creatures imprinted in them.

Bobrovskiy was adamant his idea would work as he knew of a remote place in Russia where he could search for the kind of Ediacara biota fossils needed to prove whether or not they were our earliest animal ancestors. He knew because Andrey Ivantsov, Michail Fedonking and other Russian palaeontologists had already discovered earth layers with such fossils in the region.

Brocks agreed to work with Bobrovskiy, taking him on as a PhD student, and they developed a new technique based on Bobrovskiy’s proposal to study these fossils.

One of the Ediacaran fossils that Bobrovskiy found in Russia was Dickinsonia, which grew up to 1.4 metres in length and was oval shaped with rib-like segments running along its body.

With a surprisingly clear-cut result, their analysis revealed Dickinsonia as the earliest-known animal in the geological record that lived on Earth 558 million years ago.

Brocks says being able to study molecules from these ancient organisms was a game-changer. “When Ilya showed me the results, I just couldn't believe it,” he says.

“I also immediately saw the significance – it was completely clear. The results were black and white; there was nothing to interpret. These creatures produced cholesterol, which is the hallmark of animals and it tells us that this creature, in fact, was our earliest ancestor.”

In September last year, their ground-breaking findings were published in Science. Their research – which included an earlier finding that another kind of Ediacara biota fossil, Beltanelliformis, was a colony of photosynthetic bacteria – was subsequently named in Science’s top-10 Scientific Breakthroughs of the Year 2018.

ANU Vice-Chancellor Professor Brian Schmidt AC singled out Bobrovskiy for this impressive accolade, during the State of the University address in February this year. “Not bad for your PhD!” Schmidt told the audience at Llewellyn Hall.

Schmidt’s work that won him the Nobel Prize in Physics in 2011 had also been selected as one of the Science top-10 Scientific Breakthroughs of the Year 1998.

This recognition from a highly prestigious scientific journal is arguably one of the biggest accolades research can receive in its first year.

The way Bobrovskiy unearthed the fossils of Dickinsonia to conduct his ambitious research offered clues as to the kind of scientist he would soon reveal himself to be.

“I took a helicopter to reach this very remote part of the world – home to bears and mosquitoes – where I could find Ediacara biota fossils with organic matter still intact,” he says.

“These fossils were located in the middle of cliffs of the White Sea in Russia that are 60 to 100 metres high. I had to hang over the edge of a cliff on ropes and dig out huge blocks of sandstone, throw them down, wash the sandstone and repeat this process until I found the fossils I was after.”

The strange creature – which grew up to 1.4 metres in length and was oval shaped with rib-like segments running along its body – lived on Earth 20 million years prior to the 'Cambrian explosion' of complex animal life such as molluscs and arthropods.“The fossil fat molecules we extracted proved that animals were large and abundant 558 million years ago – millions of years earlier than previously thought,” Bobrovskiy says.

Brocks says scientists had been fighting for more than 75 years over what Dickinsonia and other bizarre fossils of the Ediacaran biota were.

“The fossil fat now confirms Dickinsonia as the oldest-known animal fossil, solving a decades-old mystery that has been the Holy Grail of palaeontology,” he says.

Bobrovskiy says Dickinsonia and other types of Ediacara biota fossils hold the key to the connection between the old world dominated by bacteria and the world of large animals that emerged 540 million years ago during the 'Cambrian explosion'.

“The problem we had to overcome was finding Dickinsonia fossils that retained some organic matter,” he says.

“Most rocks containing these fossils such as those from the Ediacara Hills in Australia have endured a lot of heat, a lot of pressure, and then they were weathered after that – these are the rocks that palaeontologists studied for many decades, which explained why they were stuck on the question of Dickinsonia's true identity.”

Only by extracting and analysing molecules from inside the Dickinsonia fossil found in ancient rocks in Russia was Bobrovskiy able to make his breakthrough.

A more recent study led by Bobrovskiy published in Nature Ecology and Evolution shows that simple physical properties of sediments can explain Dickinsonia's preservation, and implies that what can be seen today may not be what these creatures actually looked like.

“These soft-bodied creatures that lived 558 million years ago on the seafloor could, in principle, have had mouths and guts – organs that many palaeontologists argue emerged during the Cambrian period tens of millions of years later,” Bobrovskiy says.

Bobrovskiy and Brocks say they have made another discovery they think could be as remarkable as Dickinsonia – but they won’t reveal any details until the results are published in a peer-reviewed journal.

We will just have to wait and see, but I have no doubt they are right.