Foxes kill about 300 million native mammals, birds and reptiles each year, and can be found across 80% of mainland Australia, our devastating new research published today reveals.

This research, the first to quantify the national impact of foxes on Australian wildlife, also compares the results to similar studies on cats. And we found foxes and cats collectively kill 2.6 billion mammals, birds and reptiles every year.

This enormous death toll is one of the key reasons Australia’s biodiversity is suffering major declines. Cats and foxes, for example, have played a big role in most of Australia’s 34 mammal extinctions, including the desert rat-kangaroo which rapidly declined once foxes reached their region.

Australia must drastically scale up the management of both predators, to give native wildlife a fighting chance and to help prevent future extinctions.

Australia is home to 1.7 million foxes

European colonisers brought foxes (and cats) to Australia. From 1845, foxes were released into the wild in Victoria for the “sport” of hunting them on horseback with a pack of hounds.

Fox populations soon exploded, thanks to the deliberate introduction of rabbits and hares in the 1800s. Rabbits and hares are not only a food source for foxes, they also eat the vegetation that native animals need for food, habitat, and to hide from predators. They continue to boost fox numbers today.

Our study estimates there are now 1.7 million foxes in Australia, spread across 80% of the mainland and on 50 Australian islands. They’re largely absent from tropical northern Australia and Tasmania.

By comparison, cats occur over more than 99.9% of the country, including on far more islands.

Fox densities are highest in temperate mainland regions, including forests and farms, and near urban areas where food and shelter are abundant. The Victorian government estimates there are as many as 16 foxes per square kilometre in Melbourne. 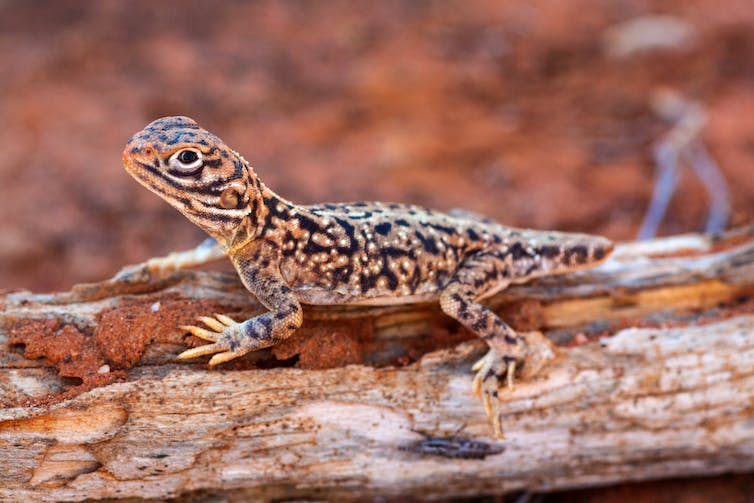 Cats and foxes eat almost 2 million reptiles across Australia every day, such as the central netted dragon. Nicolas Rakotopare (Lerako.net)

What are foxes eating?

The 300 million native animals that foxes kill every year consists of: 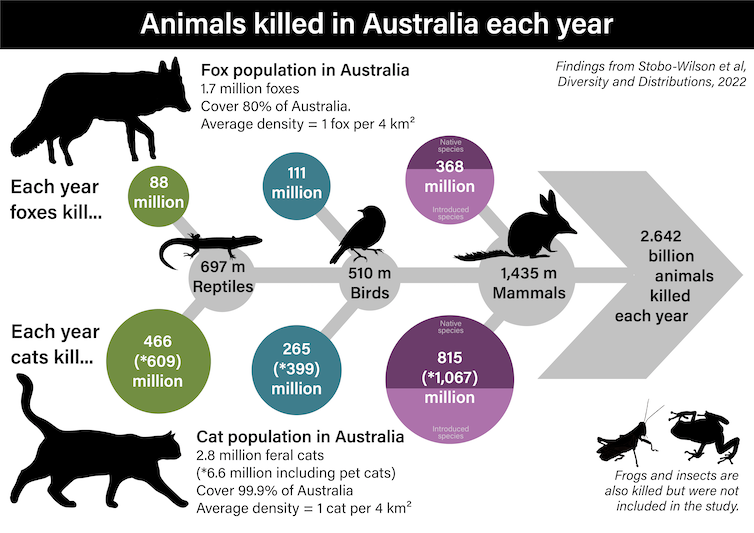 While rabbits and house mice form a major part of fox diets, there’s no evidence foxes (or cats) limit their numbers. Changes in rabbit and mice populations are largely driven by climate fluctuations.

Our findings are underpinned by modelling data assembled from almost 100 field studies. This included 49,458 fox poo and stomach samples, and fox density estimates at 437 locations.

Foxes are also known to eat bird and reptile eggs, and threaten the breeding success of many turtle species. However, we didn’t tally their impact on turtle eggs (or on fish, frogs or insects) because of insufficient data - they’re highly digestible and often hard to identify in fox poo.

Carrion (dead animals) account for an average of 10% of fox diets, but we excluded carrion in the estimated numbers of animals killed. 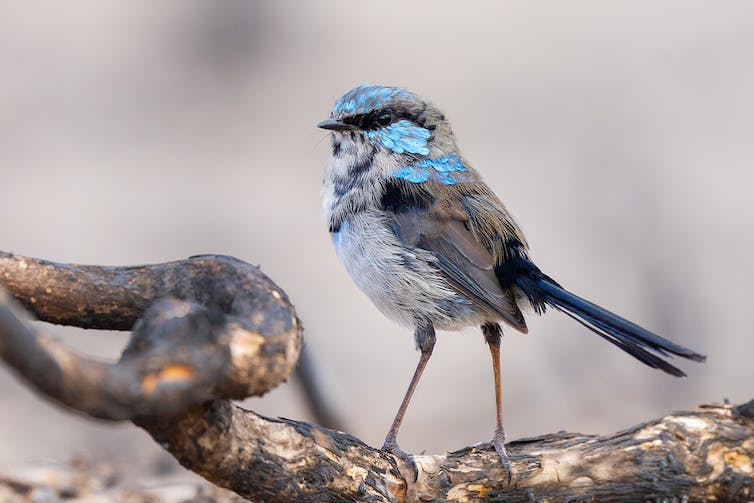 Fairy wrens and other birds that nest and feed near the ground are vulnerable to foxes and cats. Nicolas Rakotopare (Lerako.net)

Foxes and cats: a deadly combination

Although they eat many of the same species, foxes take larger prey than cats and have a bigger toll on kangaroos, wallabies and potoroos.

Cats eat smaller prey, so eat a lot more of them. Nationally, feral cats kill about five times more reptiles, two and a half times more birds and twice as many mammals than foxes.

The impacts of both predators are concentrated in some regions more than others. And although cats kill more animals overall nationally, in some areas foxes take a greater toll.

This includes the Warren and Jarrah Forest in Western Australia, the Eyre and Yorke Penninsula in South Australia, across Victoria and in NSW’s Blue Mountains.

This is why foxes take a larger toll on forest animals such as possums and gliders, and kill over 1,000 animals per square kilometre each year in these areas. 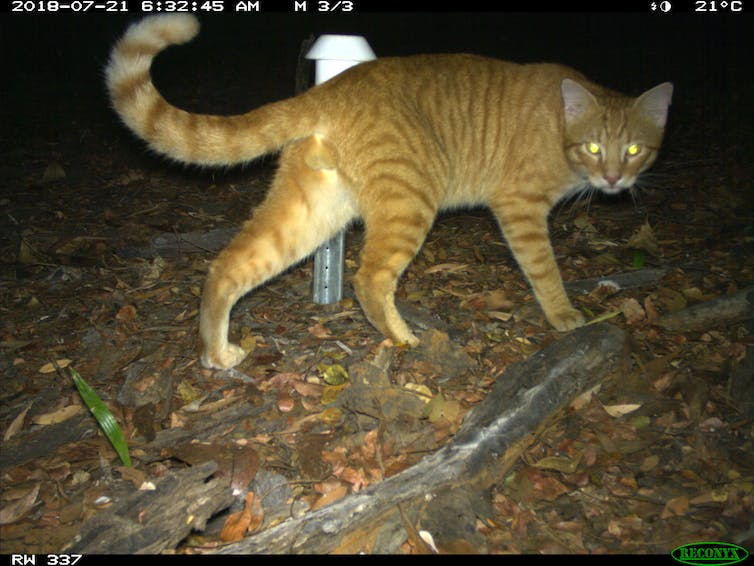 To understand and manage these threats, it’s essential to take the cumulative impacts of both introduced predators into account. Many species fall prey to both cats and foxes.

So what needs to change?

The only way to stem these losses, and prevent the extinction of many vulnerable species, is to step up targeted and integrated cat and fox management. 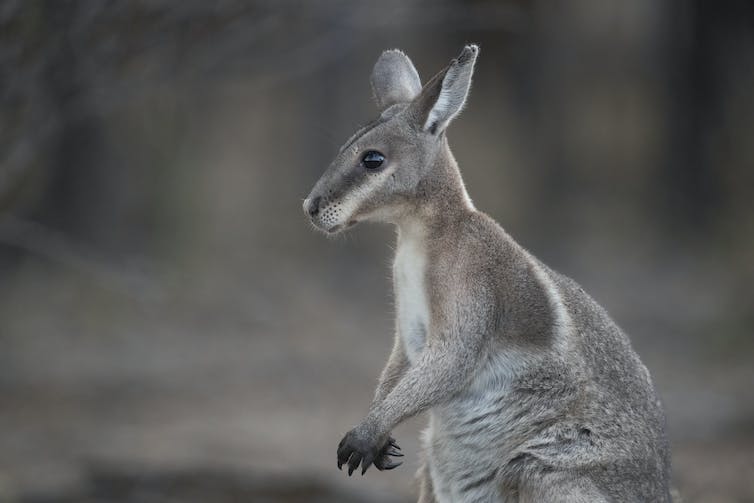 Foxes and cats kill 4 million mammals every day across Australia. The bridled nailtail wallaby was once common throughout eastern Australia, but foxes and cats (and habitat loss) pushed it close to extinction. Nicolas Rakotopare (Lerako.net)

Cat and fox eradication programs have had success in fenced areas and on islands. For example, cat eradication on Dirk Hartog Island is enabling many native animals to be reintroduced.

And long-term broad-scale management programs have enabled the recovery of threatened species in wider landscapes, such as the Bounceback Program helping yellow-footed rock wallabies and other wildlife in SA’s Flinders Ranges.

Our new research highlights the urgent need to increase investment for cat and fox management across Australia. Management will need to be large-scale and strategically coordinated as both species breed like rabbits, so to speak, and travel great distances.

This means patchy, or small-scale lethal programs can allow their numbers to quickly rebound.