If receiving your fruit and veg box makes you feel weirdly happy, you’re not alone »

Scientists devised a cheap, ingenious trick to save this bird from a blood-sucking maggot – and it works brilliantly 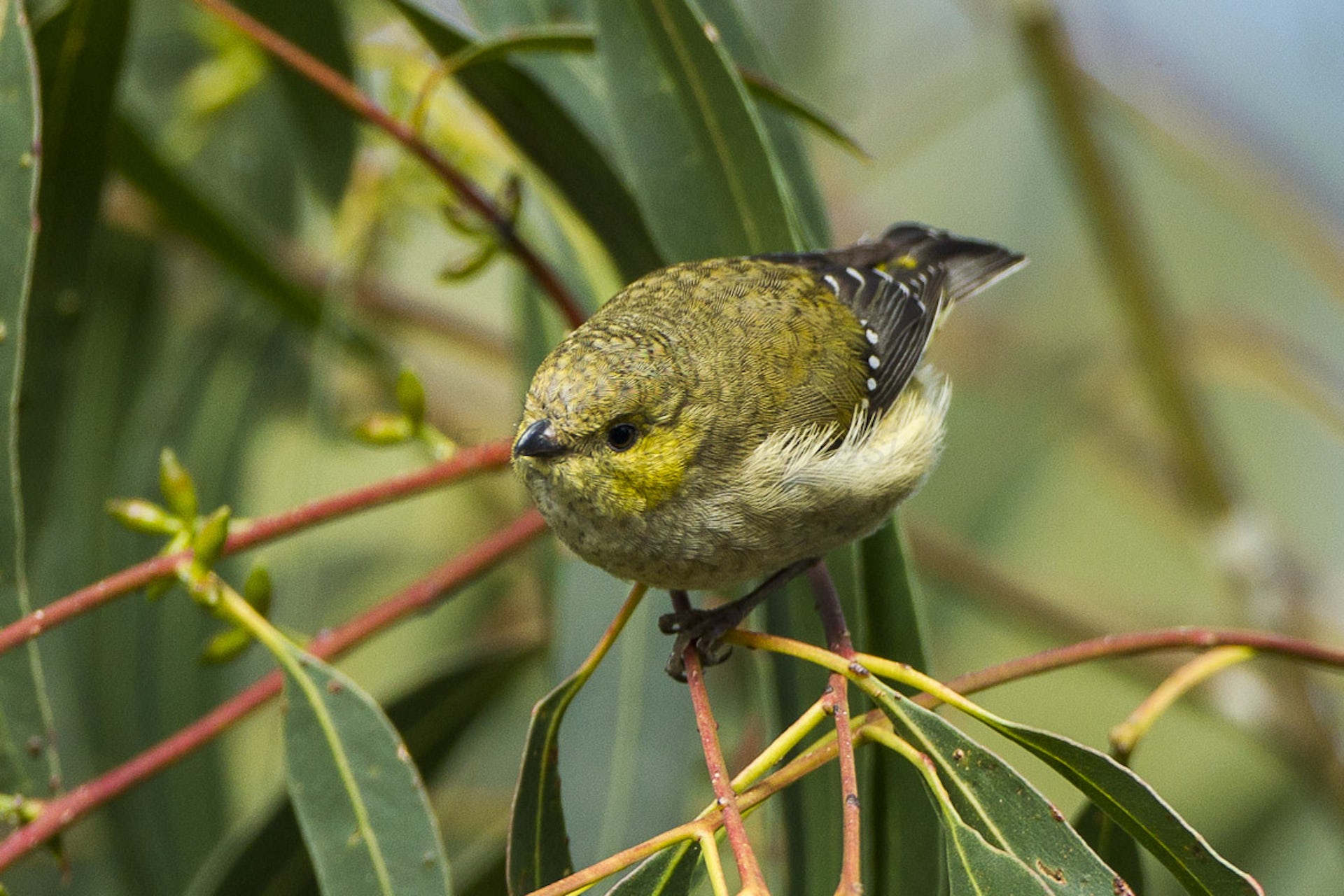 Saving endangered species from extinction is a challenging job that requires creative, affordable and effective interventions. In a rare good news story for conservation, we came up with one such method.

We want to save the forty-spotted pardalote – an extremely rare Tasmanian bird about the size of a ping pong ball. The few remaining individuals are at risk from an unusually harmful threat: blood-sucking fly larvae.

These parasitic flies search out the nests of pardalotes to feed on their defenceless young. The moment a pardalote chick hatches from its egg, the fly maggots burrow into its skin to drink its blood. The parasite kills nine out of every ten chicks in some areas.

We needed a way to ward off the parasites. As our new research shows, we made one – using chicken feathers and everyday items you’d find in any hardware store. The results show that with a bit of creative thinking and expert knowledge, vulnerable species can be protected. 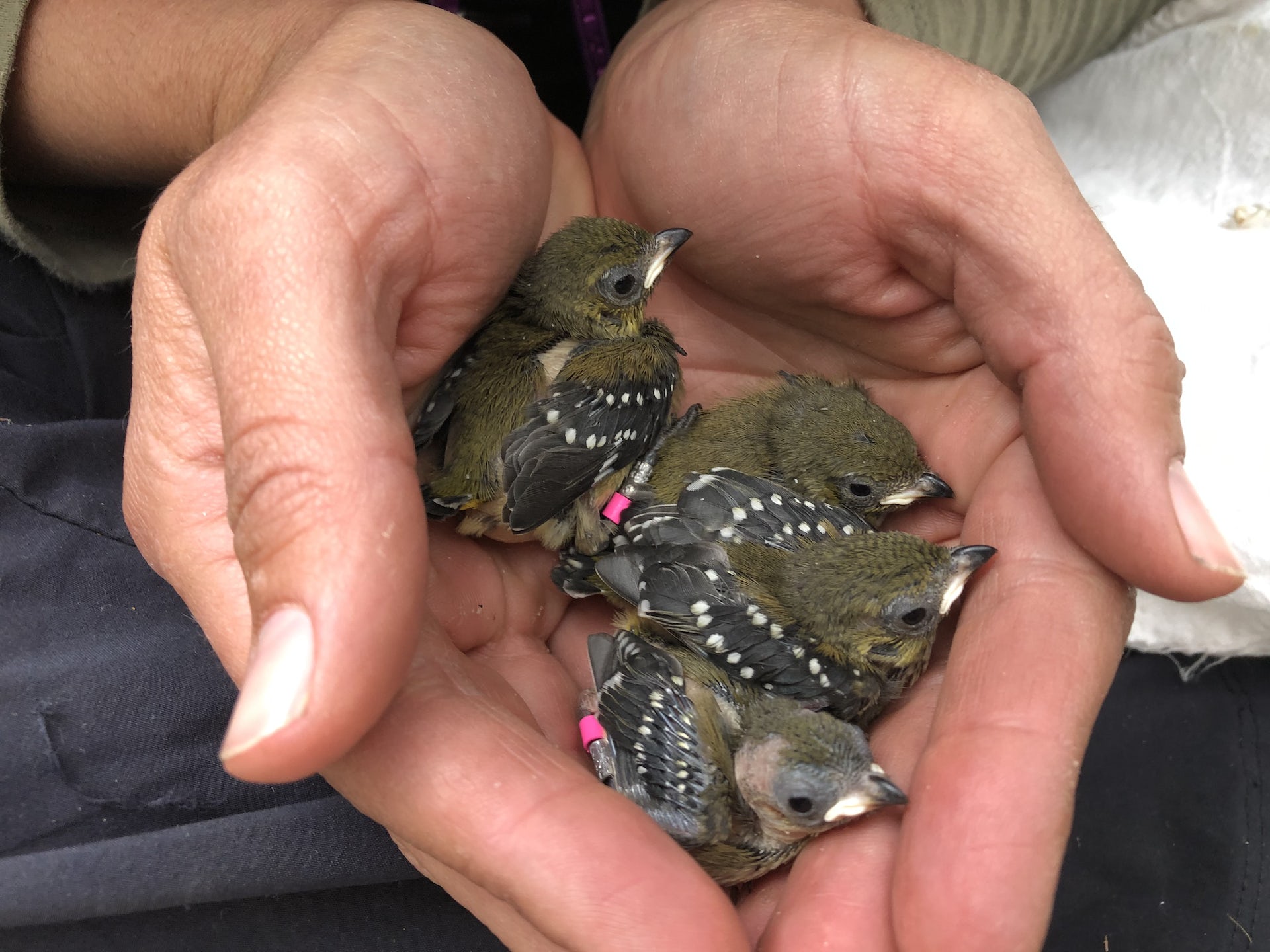 Forty-spotted pardalotes are olive-green songbirds with two rows of white dots along their wings. Deforestation has caused their local extinction across much of mainland Tasmania. The birds survive mostly on islands off the east coast in numbers that vary according to habitat quality.

They forage predominantly in the foliage of white gums (Eucalyptus viminalis) for manna, a sweet crystallised form of tree sap. Many Australian birds feed on manna, but forty-spotted pardalotes are unique because they “farm” it – using their beaks to make tiny nicks in leaves and stems to stimulate manna production.

But parasitic flies are threatening the survival of these remarkable little birds. The maggots of these flies, known formally as Passeromyia longicornis, bore into exposed skin of featherless chicks and feed on their blood. Unsurprisingly, as the maggots grow fat, the chicks suffer and usually die. Small birds are killed quickly when infested with large numbers of blood-sucking maggots.

Extracting a Passeromyia longicornis maggot from the chick of a common starling.

We wanted to find an effective way to help protect pardalotes from fly-strike. The solution also needed to be cheap, to improve the odds that land managers can help pardalotes over large areas in the long term.

Using creative thinking and our detailed knowledge of pardalotes, we devised a plan.

Pardalotes love to make a soft, warm nest lined with stray feathers of other birds they find on the forest floor. But finding feathers is hard, time-consuming work. We decided to supply those feathers, but with an added bonus.

We took sterilised chicken feathers (available in pet stores for canaries to build their nests) and laced them with a bird-safe insecticide that would ward off the parasites. Using scrap wire, duct tape and round plastic trays (the kind used under pot plants), we built “self-service” feather dispensers and deployed them in the forests where pardalotes were building nests. 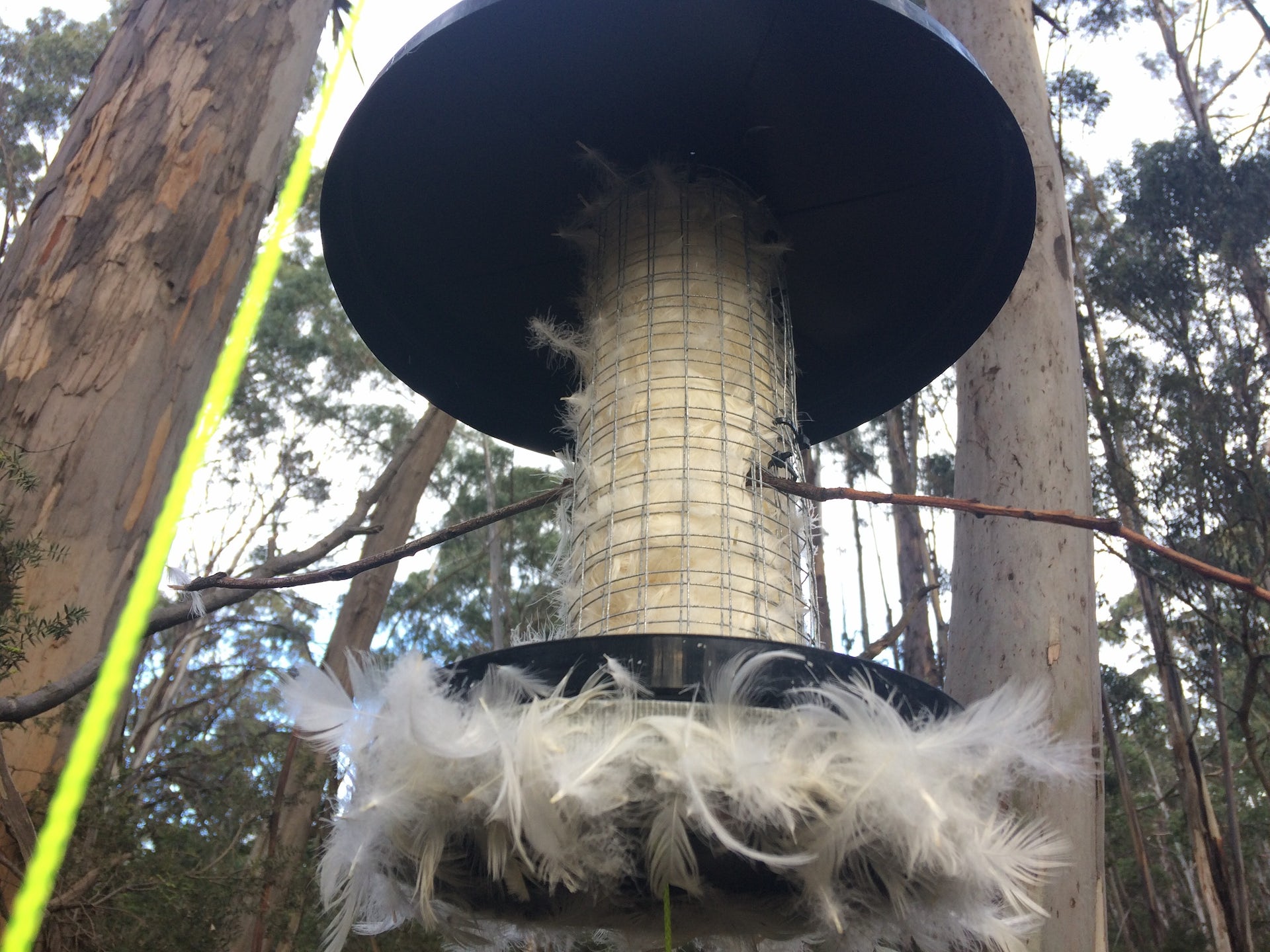 A feather dispenser built by the authors. Author supplied

It didn’t take the pardalotes long to find this bonanza of free building materials – our dispensers were as busy as the toilet paper aisle during a pandemic! Some birds built their nests mostly out of our medicated feathers.

And now for the best part: the survival of chicks dramatically improved in the nests built with insecticide-treated feathers. On average, 95% of chicks from these birds survived, compared with only 8% of birds that used feathers without insecticide.

This more than tenfold increase in nest survival came with very little effort on our part. We just provided the feather dispensers, and the pardalotes did the rest.

Parasites can become an existential threat when the populations of their hosts become very small. But it’s important to note that parasites are a natural part of the ecosystem and have their own intrinsic value. Eliminating them entirely can create unexpected new problems – and that is not our aim.

Passeromyia maggots have been recorded in other small birds in our study area. This means there are plenty of other more abundant host birds for the flies to feed on, without adding to the problems that endangered forty-spotted pardalotes already face.

Our work has shown that by understanding how species live, it’s possible to exploit their natural behaviour to provide targeted protection from threats such as parasites.

This nest of forty-spotted pardalote chicks survived because their nest was built using insecticide-treated chicken feathers.

Four academics, including Dr Tristan Reekie from the Research School of Chemistry, have been recognised with prestigious ACT Young Tall Poppy Science Awards.

Lately the supergiant star has been behaving strangely.