For several years Associate Professor Rowena Ball from the ANU Mathematical Sciences Institute and the Research School of Chemistry has been participating in the CSIRO STEM Professionals in Schools program.

I visit the schools in June or July each year, and do science enrichment activities with the students, planned in collaboration with my partner science teachers at the schools.

Last year I involved the students in my research on the origin of biological homochirality.

I wrote up a little article on it for Double Helix (the CSIRO science magazine for school students), with the school’s name credited. The school students (and teachers) are still bursting with pride that their humble little remote school features in what they see as a real, nationally famous scientific article: 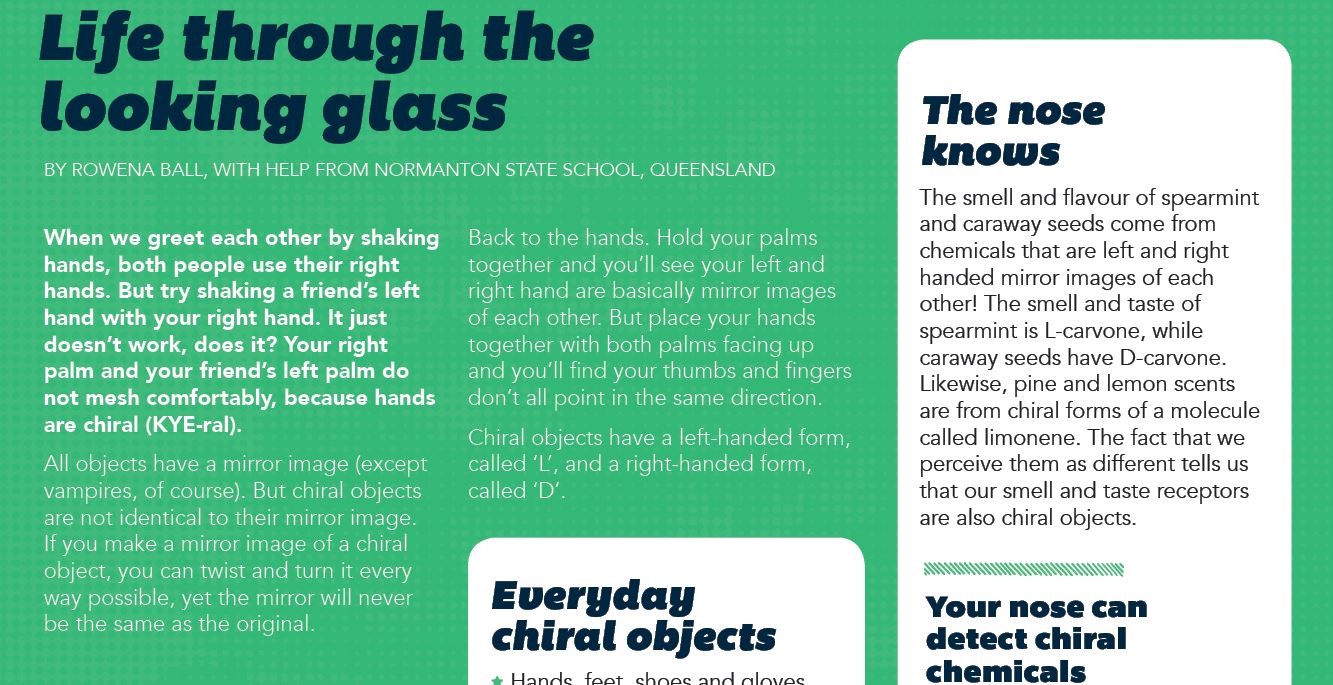 So actually I am prouder of this little piece than all the peer-reviewed articles I have published!

I also maintain a science blog for the students and teachers called Gulf Geeks. I try to make appropriate posts as often as I can.

Here is a picture of my Gulf Geeks, posing in front of the iconic vintage railmotor, the Gulflander, and its driver:

I came to realise that most of the kids had no idea who a scientist or engineer is, or what they do in their jobs, or how they get there. They don’t see any scientists day-to-day – or ever! So for this year’s activity I prepared a presentation on the different types of STEM professionals, featuring Aboriginal scientists and engineers exclusively, and quoting what they say about their jobs in their own words.

If the kids are to engage with science, they must be able to see themselves in its practitioners. I gave each student a pack of STEM cards, which are ordinary playing cards that each feature a different type of scientist on the face. For each scientist I talked about, they had to identify the appropriate card and read out the description on it.

The students were rapt! They must have been inspired, because after school some of them approached Ken, the train driver and a graduate engineer, at the train station and asked him about engineering! This is a big thing for kids who are normally extremely shy.

I regard this partnership as a long-term commitment. There is a right-way and a wrong-way of engaging with remote communities. Wrong-way is to parachute in from the sky, deliver some program or other, fly out two days later, and tick boxes on some report. Aboriginal communities have had enough of that. Right-way is to drive in, in an ordinary car, 700 km west from Cairns airport in this case. One stops along the way and talks to people, word flies ahead, and people know to expect you. Stay the weekend in the community. Go to the pub. Go to church – belt out a hymn or two! Pastor’s approval and that of other senior elders will go a long way.

All this means I usually have to commit over a week of time for school visits of two days.

Although we think of the Gulf country as “remote”, to the people who have lived there for thousands of years it is rightfully the centre of the universe, and it is Canberra that is remote. Normanton parents and grandparents say: ‘Alright then, if science education is so important for our kids, you come up here and give us science!’